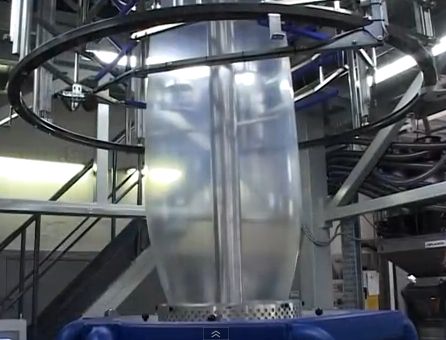 The file FilmProcess.txt contains four columns, each of 351 values, of the film extrusion process series.

In order from left to right the columns are of the Heater current, the Valve position, the Pressure and the Width.

The data arose from a planned experiment in which the Heater current and Valve position were adjusted approximately every five seconds according to a table of random normal values. In practice these input settings had to be occasionally modified to keep the process stable and the adjustments were made slightly more slowly than the sampling interval of 5 seconds, so there is some slight autocorrelation in their values. The data were supplied by ICI Ltd. in 1968 for a PhD project and were scaled to give some commercial protection as their analysis was publically available.

The picture is a still taken from a video here showing the operation of a modern film process plant. The plastic is extruded in a ring at the foot, to form a bubble which is gathered in at the top. The process is challenging to set up and control.